At this point we all know my love of single-serving microwave treats. If you don't you need to try my microwave apple crumble. Well these need another standing ovation. I turned my morning oatmeal into cinnamon rolls. But not just cinnamon buns... cinnamon buns made in the microwave. Like what! My mind is still blown. Now you can have mini cinnamon buns in less than 15 minutes any day of the week!

How do you turn oatmeal into cinnamon rolls?

Now anyone that knows me knows my love of oatmeal. Seriously if you haven't tried my baked oats now is the time. Except sometimes I get a little bored of my regular old oatmeal. So one day I was thinking what if I could create mini cinnamon buns out of the same ingredients I make my oats with? I did a little recipe testing and voila microwave cinnamon buns were created.

These cinnamon rolls aren't your regular cinnamon buns. These are packed with fibre and whole grains helping to create a breakfast that will not only fill you but giving you lasting energy throughout the day. The best part about these is you probably already have all of the ingredients on hand! So since you can make them in less than 15 minutes they can now be your new favourite breakfast, snack or dessert too!

Can you bake these Microwave Cinnamon Rolls?

This is a question I get asked a lot with m any of my microwave dishes. The answer is yes you can! For anyone who may not have a microwave or would just prefer to use the oven you can bake these at 375 degrees F for about 15-20 minutes or until they start getting a little brown on top!

What ingredients do I need for Microwave Cinnamon Rolls?

Oat Flour- I love using oat flour for some added whole grains and fibre! To make my oat flour I just blend an equal amount of oats in a high powered blender or food processor. You can also buy oat flour pre-made like this one.

Milk- Whatever milk your heart desires. Oat, almond, cashew, dairy... the choice is yours!

Baking Powder- To help these babies rise! Don't forget to add it or else your rolls will be a little on the flatter side.

Cinnamon- LOTS and lots of cinnamon. The best part of cinnamon rolls is cinnamon in my opinion! You can never have too much cinnamon (I've blocked out the memories of the 2010 cinnamon challenge).

Banana- I use banana to help sweeten these rolls up a bit. As they are made out of just oats they aren't as sweet as typical cinnamon rolls so the banana helps with that!

What are some other easy breakfasts I can make?

My love for breakfast runs deep. As we all know I'm a big oatmeal girl. But I do get tired of my regular microwave oats from time to time. When that happens some of my favourite go-to quick and healthy breakfasts include:

I love seeing you make my recipes! If you make these microwave cinnamon rolls be sure to tag me on Instagram @nourishedbynic or leave a comment here letting me know how it was 🙂 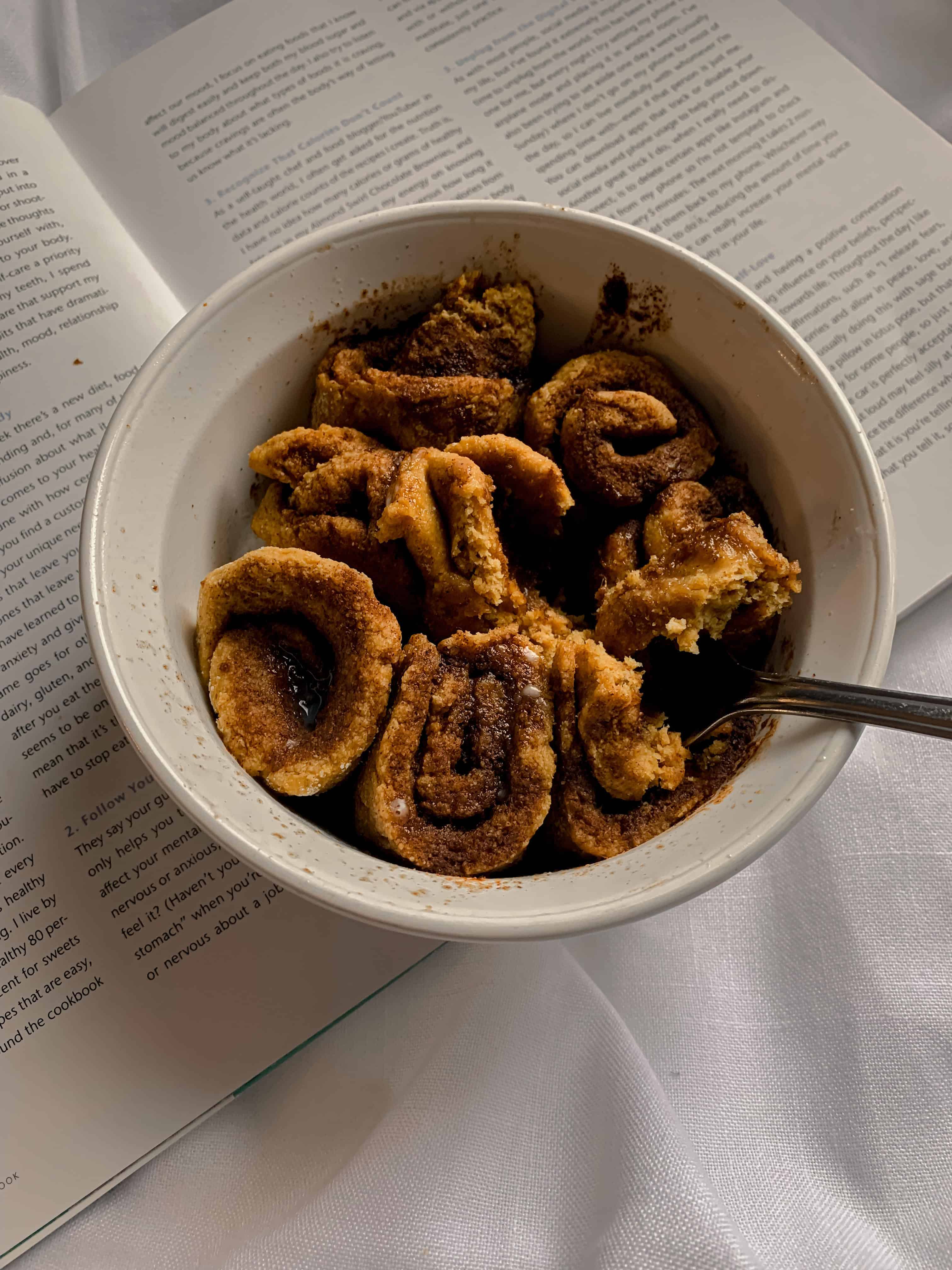 I’m Nicole, a Registered Dietitian, recipe developer and content creator on a mission to help individuals rediscover the joys of cooking with easy, accessible, healthy recipes. After years of struggling to find balance I have finally found that there is a way nourish your body while also fueling your soul.

On my page you'll find yummy recipes, wellness tips, and even some of my favourite travel and lifestyle recommendations!