Cinnamon rolls that take under an hour from start to finish? Sign me up. These Greek yogurt cinnamon rolls are made with fool-proof 3-ingredient dough, and are the perfect addition to any weekend morning brunch!

Sunday mornings are made for cinnamon rolls. The warm smell of cinnamon in the air. Sitting on the couch with a latte, digging into a giant cinnamon bun drizzled with icing. The best part? These Greek yogurt cinnamon rolls take less than 1 hour to make. Start to finish!

Why you need these easy cinnamon rolls:

Cinnamon rolls have always been a cozy morning staple. The problem is, they always seemed way too complicated for me to even try to attempt. Don't get me wrong- store bought cinnamon rolls are good, but there's just something about knowing you made something yourself that just makes everything taste one hundred times better. That is why I created these SUPER easy, Greek yogurt cinnamon rolls. They are completely fool proof, don't require any time to rise and are SO good. They are LIFE CHANGING.

I swear as long as you have some cinnamon, Greek yogurt, flour and sugar you will 100% be able to make these cinnamon rolls. Since I first started making them they've quickly become a weekend staple in my house and are requested almost weekly. So if I haven't convinced you yet... THIS is your sign you need to make these Greek yogurt cinnamon rolls asap.

What is 3-ingredient dough?

These cinnamon rolls are made from 3-ingredient dough. Also known as the dough these bagels and these pizza rolls are made from. I love this dough because it is SO easy to make. All you need is flour, baking powder and a thick yogurt and voila you have the most versatile bread dough! It's safe to say I've fallen in love with 3-ingredient dough. It just helps makes all those recipes that sounded difficult so much easier. Like these cinnamon rolls... now you can have homemade cinnamon rolls whenever you feel like them! The bonus is that if you use Greek yogurt you get an extra boost of protein too! It's a win-win!

These are highly requested in my house and they're soon to be in yours too!

What You Need to Make These Greek Yogurt Cinnamon rolls:

Follow the steps below to make these super easy Greek yogurt cinnamon rolls!

Lightly flour a kitchen surface, using a rolling pin roll out dough into a thin (around ½ an inch) rectangular shape

Combine sugar, melted coconut oil and cinnamon until a paste forms and evenly spread over the top of the dough

Slowly roll dough starting from one of the shorter rectangular sides until the dough is in a cylinder shape.

Use a piece of string to cut dough into 5-6 cinnamon rolls and arrange in a baking dish. Place into oven at 350 Fahrenheit.

If you are looking for other gluten free breakfast options you can try THESE: spinach and feta egg cups, banana bread oat cups or zucchini brownie baked oats.

If you are looking for a way to make these Greek yogurt cinnamon rolls even better... look no further!

All you need for this recipe is:

I find these cinnamon rolls taste best when eaten fresh HOWEVER, they can be stored in an airtight container in the fridge for up to 4 days. To reheat- just place them on a place in the microwave and heat for about 1 minute.

To freeze- tightly wrap each cinnamon roll individually using plastic wrap. When you are ready to heat them, place in the microwave on the defrost setting for about 2 minutes!

Be patient with the dough! 3-ingredient dough can be a little finicky at first. I strongly recommend sifting the flour to ensure you have the correct measurements, and if needed only adding 1 tablespoon of additional yogurt at a time until the desired dough texture is reached.

Help! My dough is too dry what do I do?

Don't worry! This can sometimes happen with 3-ingredient dough depending on the type of yogurt you use. The good news is there is a very easy fix, all you need to do is add a little more yogurt! I like to start with an additional 1 tablespoon of yogurt and going from there!
** Do not add more than 1 tablespoon of yogurt at a time as you don't want your dough to become overly sticky and impossible to roll out!

The dough! A classic cinnamon roll dough typically consists of bread flour, yeast, warm water and a few more ingredients. To activate yeast and allow it to really do it's job you usually need to allow a cinnamon roll dough to proof for about 1-2 hours before you are able to continue with the recipe.

To make these cinnamon rolls we use a dough made from just flour, yogurt and baking powder and because of this, the dough requires no time to proof (or rise).

I personally am a huge fan of using 3-ingredient dough because it significantly cuts down the prep time for this recipe and it allows cinnamon buns to become a weekly staple rather than just a treat!

It depends on what your definition of healthy is. The use of Greek yogurt in the dough does add a little extra protein typical cinnamon rolls do not have. However to create a balanced meal I would still recommend pairing these with another form of protein along with a source of fibre (a great option is some eggs and fruit)!

Are these gluten free cinnamon rolls?

If you choose to use regular all-purpose flour, no these cinnamon rolls are not considered gluten free. However I have any many individuals make this recipe using gluten free 1:1 flour with great success!

Can I double this recipe?

Yes you absolutely can! If you are making these cinnamon buns for more than 5-6 people feel free to double the recipe, just make sure you use two separate baking pans!

Ps. I love seeing my recipes in action! If you decide to make these Greek yogurt cinnamon rolls don't forget to snap a picture and tag me on Instagram- @nourishedbynic or leave a comment below! 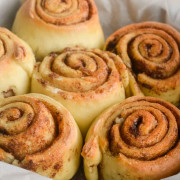 * If your dough is slightly dry, add more yogurt by the tablespoon until all of the flour is able to be mixed in and the dough stays together *Although I personally have not tested this recipe with any other yogurt or flour alternatives, I have heard that both gluten free 1:1 flour and coconut yogurt have worked!

I’m Nicole, a Registered Dietitian, recipe developer and content creator on a mission to help individuals rediscover the joys of cooking with easy, accessible, healthy recipes. After years of struggling to find balance I have finally found that there is a way nourish your body while also fueling your soul.

On my page you'll find yummy recipes, wellness tips, and even some of my favourite travel and lifestyle recommendations!